41 Licorna Beach
Welcome to Travelstart. Get off your accommodation booking by paying with the voucher code before . 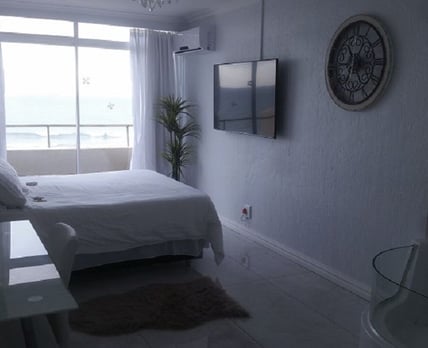 The apartment has four beds, (two singles, one king and one queen) there is a three-quarter sleeper couch and large L-shaped couch in the lounge. It is fully equipped for 6 - 7 people including bath towels, linen, cutlery, crockery, with microwave and stove. TV is provided. Direct access onto Umhlanga's world class Blue Flag bathing beaches.

For golfers there are five excellent golf courses in a 15 minute drive radius from Umhlanga. There are three large Casinos within the same radius. A twenty minute drive to Durban where there is the new uShaka Marine and Entertainment World, harbour, yacht club, waterfront restaurants and theatres.

Umhlanga also offers dolphin viewing and scuba diving. A two and a half hour drive to 4 of the 'Big Five' game parks, and the incomparable St. Lucia wetlands and a two hour drive from the Drakensberg Mountain range and the acclaimed 'Midlands Meander'.

Deposits are not refundable in the event of a cancellation or non arrivals.
Arrival time is 2pm and Departure time is 9am.
Keys are collected and returned at reception
75% deposit is required within 3 days of booking and the balance is payable 10 days prior to arrival to SafariNow.
Accommodation will be automatically cancelled if the deposit is not received by the due date..
Cancellation Policy:
To avoid any misunderstanding, a booking constitutes a binding contract. All guests confirming a booking are advised to take out insurance to cover the full cost of their accommodation in the event of a cancellation. We will seek compensation for any cancelled accommodation including premature curtailment.
The Terms and Conditions of this booking are deemed as being accepted on receipt of the deposit / credit card details.

4 / 5
★★★★★
2 reviews
5 star
4 star
3 star
2 star
1 star
liz pillay
January 2018
★★★★★ The Apartment was very spacious and comfortable. The patio was beautiful. Its equipped with everything you need to have a relaxing holiday on the beach. It was great to have a washing machine and tumble dryer at your finger tips with kids it made it really convenient doing the laundry. This is a really lovely place and conveniently situated in the heart of Umhlanga Rocks. I would however like to... Read more
shakera loonat
July 2017
★★★★★ The location is great.Certain things need fixing like the tv in the main bedroom was not working,curtain rod in living area was broken,the cupboard hinges in main bedroom are broken but other then this out stay was comfortable n would def recommend it for the views and outdoor area.

Click to display the map
41 Licorna Beach is 1.5km from the centre of Umhlanga , the nearest airport 11.6km (King Shaka International Airport).
*Distances are shown as the crow flies and not necessarily the actual travelling
FromR4950
Avg per night
per night
This establishment is not available at present