Welcome to Travelstart. Get off your accommodation booking by paying with the voucher code before .
South Africa/North West Province/Rustenburg/Royal Bafokeng Sports Palace 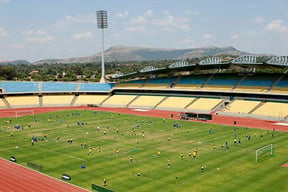 The recently built Royal Bafokeng Sports Palace in the North West Province is a multi-purpose venue that played host to the FIFA Confederations Cup 2009 and 2010 FIFA World Cup.

Improvements to the stadium have increased the seating capacity to 40,000 and provisioned it with state-of-the-art electronic scoreboards and floodlights.

The stadium is named after the Royal Bafokeng community, a group who manage the world’s richest platinum mines and who exclusively funded the sports grounds in the North West Province.

Rustenburg lies on the edge of the Magaliesberg Wilderness area and is not too far from the awesome Madikwe Game Reserve, the Pilanesberg Game Reserve and glitzy Palace of the Lost City - a great escape for revellers and gamblers.

Things to do in Rustenburg

Sleeps 20 in 9 rooms
Rustenburg Central Lodge
Centrally located in the heart of Rustenburg town, Letsatsing Lodge will give you comfort and tranquility anytime of the day.We offer value...
R1250
Avg per night for 2 guests
View Deal

Sleeps 18 in 8 rooms
Rustenburg Guest House, Self-catering
The guest houses are located across the street from each other. Here we offer different types of rooms, namely Maxi Rooms and Midi Rooms. ...
R1025
Avg per night for 2 guests
View Deal

★★★★★ 35 Reviews
Sleeps 16 in 6 rooms
Cashan Guest House
Terra Casa is located in Rustenburg and it offers luxury 5 Star guest accommodation in a prestige residential area. If you are looking for...
R1700
Avg per night for 2 guests
View Deal
See all accommodation near Rustenburg

Click to display the map
Royal Bafokeng Sports Palace is 11.6km from the centre of Rustenburg , the nearest airport 27.2km (Pilanesberg International Airport).
*Distances are shown as the crow flies and not necessarily the actual travelling

Other things to do near Rustenburg

★★★★★ 3 Reviews
Animal Park in Hartbeespoort Dam
The Elephant Sanctuary offers an exciting elephant experience. Here you can walk trunk-in-hand with...
See all things to do near Rustenburg
WEB1