Baven On Sea
Welcome to Travelstart. Get off your accommodation booking by paying with the voucher code before . 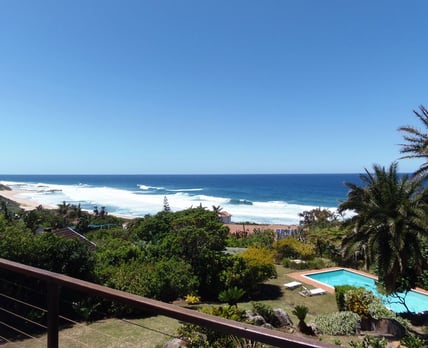 The kitchen is equipped with a stove, oven, two fridge-freezers, microwave, cutlery and crockery. There is also a dishwasher, washing machine and tumble dryer. The first dining table seats eight and the second seats six. There are also two seating areas, the first of which has a flat-screen TV with selected DStv channels and the second a fireplace.

The open-plan garden cottage sleeps two and offers a living area, kitchenette and sleeping area. The unit has a double bed and an en-suite bathroom with a shower, toilet and basin. The kitchenette is equipped with a kettle, toaster, microwave, cutlery and crockery. There is also a ceiling fan and a seating area.

More About Baven On Sea

Your account must be settled as follows:
If your arrival is in less than a month then balance payment needs to be made immediately.
If your arrival is in more than a month then balance payment needs to be made 1 month prior to arrival.
A refundable damages/breakage deposit of R 2 500.00 is required along with the balance payment of the booking. This is payable to Holidays 4 U, who will email you regarding this, in order to finalise your booking.
Payment methods accepted on the balance payment:
Regretfully no cheques and/or cheque deposits accepted.
EFT payments only.
Cash payments and/or deposits are acceptable, however, a cash deposit fee of one hundred rand (R 100.00), per deposit will be for your account and will be deducted from your damages/ breakages deposit prior to refund.
Please note that the Holidays 4 U offices are closed on the 25th of December, 26th of December and the 1st of January, therefore they are unable to accommodate arrivals and departures on these dates.
Damages/breakages deposits are refundable, pending their inspection after departure and are refunded as follows:
All Low and High season refunds will be refunded roughly two weeks (14 days) after departure.
All Peak season refunds will be refunded 1 month after departure.

Click to display the map
Baven On Sea is 1.9km from the centre of Ramsgate , the nearest airport 2.5km (Margate Airport).
*Distances are shown as the crow flies and not necessarily the actual travelling
FromR1995
Avg per night
per night
This establishment is not available at present