Adansonia Hotel Francistown
Welcome to Travelstart. Get off your accommodation booking by paying with the voucher code before . 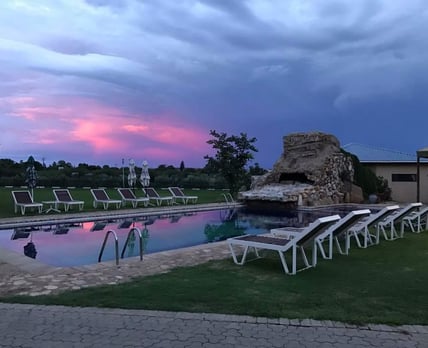 As one of the oldest towns in Botswana and site of southern Africa's first gold rush, Francistown, home to 92,500 people, is a typical frontier town, strategically placed as the gateway to the north, with all the main roads to Gaborone, Zimbabwe, Maun and Kazungula passing through it.

With the rapid influx of people, Daniel Francis - after who Francistown was named - organised the establishment of the town. Initially, the town consisted of just one main street lined with bustling western-style saloons and supply stores running parallel to the " Cape to Cairo " railway line.

Many of these old shafts and dumps now litter the urban sprawl, most whose history has long been forgotten, along with the dreams of early pioneers. But the excitement of the times is preserved in the evocative names of some of the mines which remain; ' Phoenix ', ' Bonanza ', ' Jim's Luck ', ' Lady Mary ' and ' White Elephant ' to name but a few.

It is not only the mine names which tell a story, the main street in Francistown is still called ' Blue Jacket Street ' and is dedicated to the memory of an old prospector, Sam Andersen. Sam was famous before arriving in Botswana as having been the first man to walk, with little more than his prospecting wheelbarrow, right across Australia's Western Desert. Yet he is immortalized in Francistown for the blue denim jacket that he always wore.

The gold in eastern Botswana is a complicated mix of narrow reefs, which made it very difficult for the early miners to extract, and by the 1940's much of the small scale operations had ceased, leaving the larger mines, which now merely sustain their operations hoping for new finds and an improvement in the gold price.

But today more fortunes are found in Francistown's couple of casinos than in the shallow shafts, and the real buzz is in the city's nightlife. The city boasts a range of good restaurants, sophisticated shopping malls, cinema, night clubs (jazz club called New Yorker), a couple of excellent hotels which offer fully equipped conference facilities, one of the largest referral hospitals in Botswana, an extensive library, sports facilities, well-kept parks and colourful markets.
Nowadays, the city is experiencing an economic boom.

In the last few years, Francistown has had a near total facelift - to the point that much of its original dusty frontier town atmosphere has disappeared. Whether you are continuing north to Zimbabwe or northwest to either Maun or Kasane, Francistown is a good place to purchase any further supplies you may need and fill long-range tanks.

Click to display the map
Adansonia Hotel Francistown is 0.9km from the centre of Block 10 , the nearest airport 178.4km (JM Nkomo International Airport).
*Distances are shown as the crow flies and not necessarily the actual travelling
×