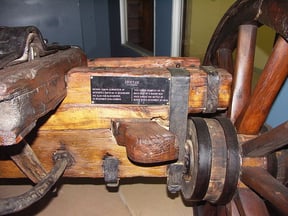 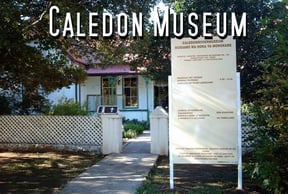 About The Smithfield Caledon River Museum

The Museum is only about a 10 minute walk from the start of the mountain hiking trail and a wonderful place to see how the old lived in our area.

Smithfield was first founded in 1848 as a church centre on the farm Waterval, owned by CS Halse. As there was no water, it was decided to move the town about 24 km northeast to its present position, on another farm, Rietpoort. It was founded when the then Cape Colony governor, Sir Harry Smith (1847-1852), required a settlement north of the Orange River. Smithfield is the third oldest village in the Free State.

It had a village board by 1860, but became a municpality only in 1948. Smithfield features in some Boer-Basotho skirmishes. In 1855, a peace meeting was held between Sir George Grey and Moshesh of the Basotho people.

The well-known mission stations, Carmel and Bersheba, are situated in the Smithfield district. Their activities are represented in the museum as well as those of leading personalities such as general C.R. de Wet and the late P.G. Hoffman, president of the Free State Republic. Ou Grietjie, a cannon used by the Free State in the Basuto wars, has been mounted in front of the magistrate's office. It was named after Margaret (Grietjie) Finlay, wife of the gunner Robert Finlay.

Added By: Purple House Guest House
Reviews:
1 Review
Things to do in Smithfield

Sleeps 8 in 4 rooms
Smithfield Self-catering
Welgeval farmstay is located on the breathtaking Free State plains near the small town of Smithfield in the Southern Free State, South...
R640
Avg per night for 2 guests
View Deal

Sleeps 6 in 3 rooms
Smithfield Guest House, Self-catering
This large modern cottage is ideal for singles, couples and especially families up to 6 people....
R750
Avg per night for 2 guests
View Deal

★★★★★ 23 Reviews
Sleeps 9 in 3 rooms
Smithfield Self-catering, Bed and Breakfast
We would like to assure guests that despite the drought conditions we have an adequate water supply for our guest as we have a borehole on...
R600
Avg per night for 2 guests
View Deal

★★★★★ 31 Reviews
Sleeps 18 in 6 rooms
Smithfield Guest House
The Purple House in Smithfield (owned by Johann Greeff, the Uncle of singer and TV star Karen Zoid) is one of the oldest, most funkiest,...
R700
Avg per night for 2 guests
View Deal

★★★★★ 14 Reviews
Sleeps 11 in 4 rooms
Smithfield Self-catering
Jasmine Cottage is situated is the small Free State town of Smithfield. Is a free standing cottage totally private and independent from the...
R750
Avg per night
View Deal
See all accommodation near Smithfield

Click to display the map
The Smithfield Caledon River Museum is 0.4km from the centre of Smithfield , the nearest airport 126.9km (Bloemfontein Airport).
*Distances are shown as the crow flies and not necessarily the actual travelling

Other things to do near Smithfield

★★★★★ 1 Review
Popular Attraction in Trompsburg
A stop-over you wouldn't want to miss. Best homebaked, farmstyle delicacies imaginable, set in the...

Golf Course in Aliwal North
Established in 1889, Aliwal North Golf Club offers you one of the best 9 hole courses in SA. Come...

Hiking Trail in Zastron
This walking trail is located near Zastron in the Free State and offers a variety of day routes. ...
See all things to do near Smithfield
Contact us Terms of use Privacy Policy