Welcome to Travelstart. Get off your accommodation booking by paying with the voucher code before .
South Africa/Western Cape/Cape Town/Llandudno/Llandudno Beach 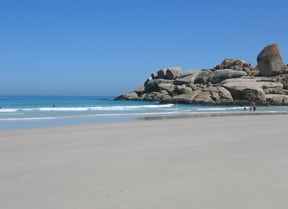 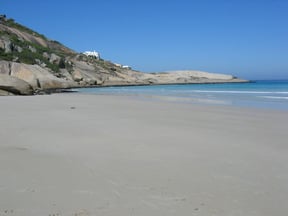 Llandudno Beach is one of those beautiful beaches that seem to have it all. Parking is a bit of a headache, so it never gets tooooo crowded. The white crescent shaped beach lies at the base of the steep slopes of the Twelve Apostles and is flanked by massive granite boulders.

One of the most popular chilling and romantic sundown picnic spots in Cape Town, Llandudno Beach is also the haunt of photographers, surfers, surf skiers and an active lifesaving crowd.

The boulders at the northern side offer some great walking with awesome views and so does the stretch along Sunset Rocks past the wreck of the Romelia to Sandy Bay. Llundudno is regarded one of Cape Town's most desirable residential areas.

Reviews:
4 Reviews
Things to do in Llandudno

4 reviews Reviews of
★★★★★
5 out of 5 stars
5 star 4
4 star 0
3 star 0
2 star 0
1 star 0
Elsbeth Verhoeven
★★★★★
20 April 2015
It was like a spot you think is in another country.
Helen Nicolas
★★★★★
08 April 2015
Beautiful beach.
Michael Hanslo
★★★★★
30 May 2012
Easily one of the best beaches in Cape Town. The water may be a little too cold for swimming, but the soft sands, lovely mountain views and west-facing horizon make up for it.Perfect for sun downers in the evening, playing during the afternoon, and the water even has decent swell for surfing.Get there early to avoid any parking problems, and also note that the closest shops will be in Hout Bay.
Daniel Goodman
★★★★★
03 March 2011
Great surf, soft white sand, amazing sunsets. In a word "breathtaking".

Sleeps 6 in 3 rooms
Llandudno Self-catering
This spectacular house is positioned at the end of a quiet cul-de-sac and overlooks the Sandy Bay nature reserve. The house is situated on...
R9600
Avg per night
View Deal

Sleeps 8 in 4 rooms
Llandudno Self-catering
Apostle Road House is located in the upmarket sea side town of Llandudno. This is an eco-friendly home is set on an expansive, elevated...
R8250
Avg per night
View Deal

Sleeps 8 in 4 rooms
Llandudno Self-catering
Situated in the upmarket seaside suburb of Llandudno, Gecko Rock offers a memorable stay to guests. It is a great option for large groups...
R18250
Avg per night
View Deal

Sleeps 10 in 5 rooms
Llandudno Self-catering
On the slopes of the elite beach-town Llandudno, lies this beautiful home fit for a king. The classic interior and attention to detail flow...
R23850
Avg per night
View Deal

Sleeps 6 in 0 rooms
Llandudno Hotel
Located in Cape Town (Hout Bay), Pure Guest House is convenient to World of Birds and Llandudno Beach. This 4-star guesthouse is within...
View Deal
See all accommodation near Llandudno

Click to display the map
Llandudno Beach is 0.5km from the centre of Llandudno , the nearest airport 29km (Cape Town International Airport).
*Distances are shown as the crow flies and not necessarily the actual travelling

Other things to do near Llandudno

Popular Attraction in Hout Bay
If you want to cruise through Cape Town on a Harley Davidson motorcycle, we offer Harleys for...

Beach in Sandy Bay
Perhaps one of the most inaccessible beaches along the Cape coast, Sandy Bay is a very secluded and...

Animal Park in Hout Bay
If you are visiting Cape Town with kids then a stopover at the World of Birds is sure to be a big...
See all things to do near Llandudno
WEB06